We want to alert our customers that there is a very common reason for improper heating of gas dryers that you can simply and quickly troubleshoot yourself.  The most common cause of this problem with gas dryers is actually restricted airflow.  These instructions are easy to follow and can save you an appliance repair service call.

Check the dryer vent that's usually located on the outside of the house to test the airflow. Simply put your hand over the vent while the dryer is operating. If you feel little or no hot air coming out of the vent, then you've got an airflow problem! 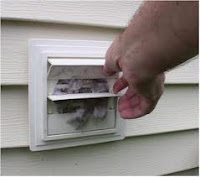 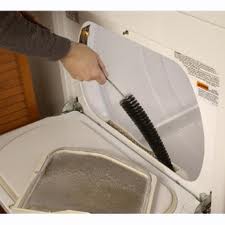 Next, open the dryer door and check the lint trap, which is often located inside the dryer at the bottom of the door opening.  Remove the lint filter and simply clean out any lint build up that you can see in the trap itself.  Some people like to use a small cleaning brush to do this - see photo at right.

In addition, if there is any restriction inside your gas dryer's external venting system, the clothes will take forever to dry. So it's important to look behind the dryer to ensure the vent duct hose has connection to both the dryer itself and to the outside vent. Carefully move the dryer away from the wall, if you need to go behind it to more closely inspect the vent hose. If the vent hose has a dent in it or is partially smashed, you will have little to no airflow and will need to try to reform the tubing so that it isn't dented or partially squashed, in order to get maximum airflow.

Now you can look to check the vent for any lint build-up or other obstructions inside the dryer duct.
If there is lint build-up inside the duct, simply remove the lint and clean it out as best you can.  It's a good idea anyway to do this general maintenance once yearly to avoid airflow restriction in your gas dryer and potentially costly repairs.

There are several types of airflow problems that can restrict moisture inside the dryer from escaping and keeping clothes from drying properly.  There are two main places that lint can build up in over time:  One is the area where your lint filter goes, or the inside the lint trap (see discussed above.)

The second place where excess lint causes restriction in airflow is in the actual dryer vent duct tubing.  If there's too much lint build-up in the vent exhaust tubing, as in the photo at left (top), and it's too much for your vacuum to clean out, it might be best to just replace the vent tubing altogether. If it does not appear to be that severe, you can try to simply remove the excess lint by vacuuming it out.

If you've performed these troubleshooting steps, and the dryer is still not heating properly, please give us a call to schedule a service call!  We will get you on the service schedule quickly and perform any repairs needed for your gas dryer to restore it to proper heating function.

Posted by Laudun Cosmetics at 10:56 PM