Recently, our Chief Tech has had the most interesting experience with a neighborhood robin, whom we've named, "Rowdy," taking an unusual liking to our company A-Appliance Repair van!  One morning, Kerry went out to start up the van and begin his day.  He climbed inside the van and started the motor, just like any other morning, but all of a sudden his attention was caught by a loud buzzing sound outside his passenger side door window - a strange vibration indeed! 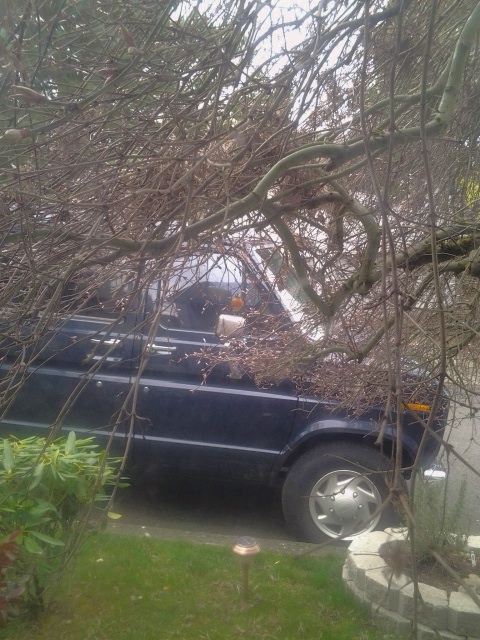 He looked closer, and to his surprise a large local robin was wildly flapping his wings, buzzing up the side of the window and apparently attacking the van! He thought maybe the bird had inadvertently flown into the window and was stunned or something, so he jumped back out of the van to see what was the matter.  The bird then flew off, but not without leaving a hefty bi-product of his recent breakfast behind all over the van's passenger side mirror!  Upon closer inspection, Kerry also noted "Rowdy" had left multiple scratch marks on the side door from crazily flapping his wings all over it.  Hmmmm.

Now, our Chief Tech was somewhat dismayed, thought it was annoying, cleaned off the mirror, and got back in the van.  However, Rowdy immediately returned and perched himself boldly again atop the passenger side mirror, and started loudly cherping / bleeping his unintelligible woes to our Chief Tech.  Kerry managed to wave the bird away, drove off and didn't think any more of it as he went about the rest of his day. Unbelievably, the very next morning when he went outside to start up the van, there was Rowdy --- at it again, beating his wings against the side of the van!  He chased the bird off, again cleaned off the messed-upon passenger side window, and began to wonder what in the heck this bird had going on in his head.  Kerry also mentioned it to me, the author, when he arrived home after work that evening.

I thought it was very odd, but then the thought struck me that it is Springtime, and all the birdies and animals are staking their annual territorial claims as part of their attempts to find new mates.  Weirder still -- did Rowdy actually see himself in the mirror and think it was another male robin that he needed to fight off?  Or was he just making a lot of buzzzz to attract a new mate?  What could it be? 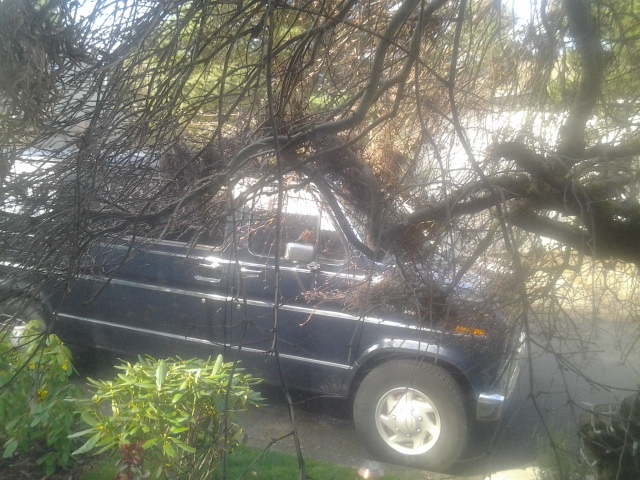 Well, we couldn't figure it out. Rowdy continued his strange morning ritual, complete with mirror-messing, for over a week, and I was then able to catch these camera shots. The bird is bold, let me tell you!   Even our two pet kitties watching him from the front window didn't deter him. Then we noticed he was not around for a few days and had huge sighs of relief, hoping Rowdy had finally found a mate and had no more time for van fly-bys.

Wrong again! - He's baaaackk!!  Well, either Rowdy doesn't like the mirror, or the van, period, or he just enjoys making a big rowdy messy fuss all over it as part of his morning happy dance....we don't know.  So we've just decided to accept our new birdie friend as part of our Pet Family and keep hoping he'll soon find a new, lovely robin mate to take his mind off perfecting van attacks.  (: